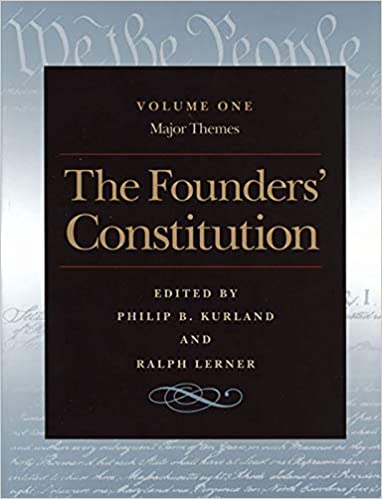 Chicago: The University of Chicago Press, 1987

Hailed as "the Oxford English Dictionary of American constitutional history" (Columbia Law Review), the print edition of The Founders’ Constitution has proved since its publication in 1986 to be an invaluable aid to all those seeking a deeper understanding of one of our nation’s most important legal documents.

In this unique anthology, Philip B. Kurland and Ralph Lerner draw on the writings of a wide array of people engaged in the problem of making popular government safe, steady, and accountable. The documents included range from the early seventeenth century to the 1830s, from the reflections of philosophers to popular pamphlets, from public debates in ratifying conventions to the private correspondence of the leading political actors of the day.

These rich and varied materials are arranged, first, according to broad themes or problems to which the Constitution of 1787 has made a significant and lasting contribution. Then they are arranged by article, section, and clause of the U.S. Constitution, from the Preamble through Article Seven and continuing through the first twelve Amendments.