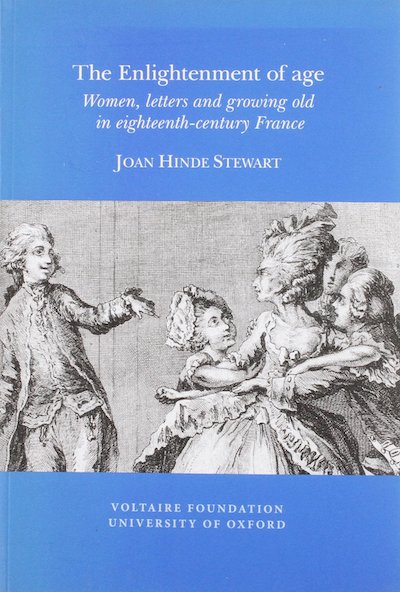 ‘Women seem to be destined solely for our pleasure. When they no longer have that attraction, they have lost everything’ (letter from Diderot to Sophie Volland, 1762). How typical was this view of the ‘older woman’ in the eighteenth century? What was it like for women of intelligence and sensibility to grow old in such a culture.

By studying the correspondences of four prominent women (Françoise de Graffigny, Marie Du Deffand, Marie Riccoboni and Isabelle de Charrière) during their middle and late years, Stewart explores the relation of female aging to respectability, sexuality and power. The author’s focus lies in the physical, emotional and professional well-being of middle-aged and elderly women during a time when all the available dignity of age seemed to belong to men. The ‘repulsiveness’ of growing old was patently a female issue.

One of the most emblematic aspects of these correspondences is the often unrequited love of older women for younger men during a period when the common wisdom denied women the right to any feelings except piety. Stewart juxtaposes their letters with representations of aging women in the period’s fictional and medical literature. She takes up several canonical, mostly male-authored, texts that purvey this common wisdom, and re-reads them with originality and grace.

Through The Enlightenment of age – at once learned, highly personal and entertaining – Stewart speaks to us about the secret lives of older women, and about the ethos of an era.