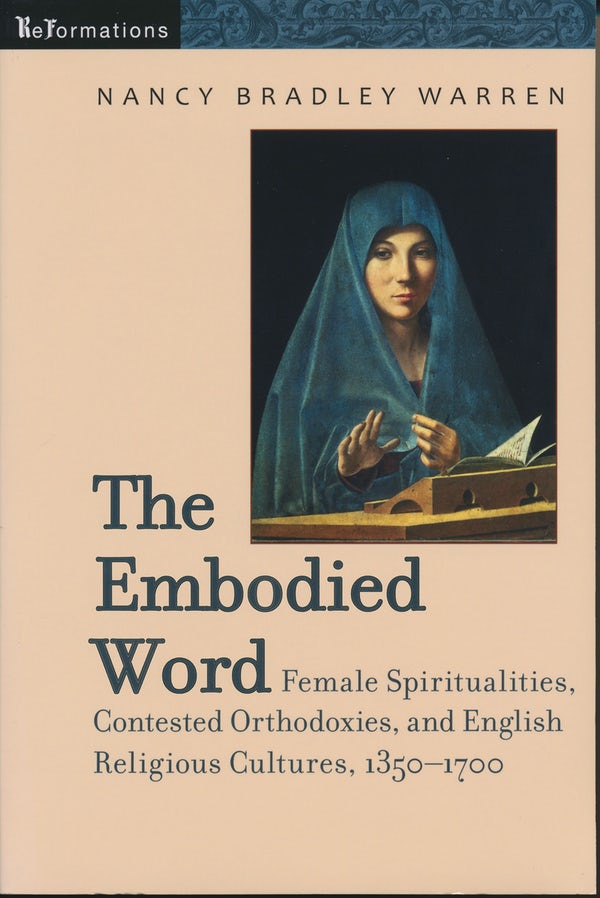 In The Embodied Word: Female Spiritualities, Contested Orthodoxies, and English Religious Cultures, 1350-1700, Nancy Bradley Warren expands on the topic of female spirituality, first explored in her book Women of God and Arms, to encompass broad issues of religion, gender, and historical periodization. Through her analyses of the variety of ways in which medieval spirituality was deliberately and actively carried forward to the early modern period, Warren underscores both continuities and revisions that challenge conventional distinctions between medieval and early modern culture.The early modern writings of Julian of Norwich are an illustrative starting point for Warren's challenge to established views of English religious cultures. In a single chapter, Warren follows the textual and devotional practices of Julian as they influence two English Benedictine nuns in exile, and then Grace Mildmay, a seventeenth-century Protestant gentry woman, "to shed light on the ways in which individual encounters of the divine, especially gendered bodily encounters expressed textually, signify for others both personally and socio-historically." In subsequent chapters, Warren discusses St. Birgitta of Sweden's Imitatio Christi in the context of the importance of Spain and Spanish women in shaping a distinctive form of early modern Englishness strongly aligned with medieval religious culture; juxtaposes the fifteenth-century mystic Margery Kempe with the life and writings of Anna Trapnel, a seventeenth-century Baptist; and treats Catherine of Siena together with the Protestant Anne Askew and Lollard and Recusant women. In the final chapters she focuses on the interplay of gender and textuality in women's textual representations of themselves and in works written by men who used the traditions of female spirituality in the service of competing orthodoxies.