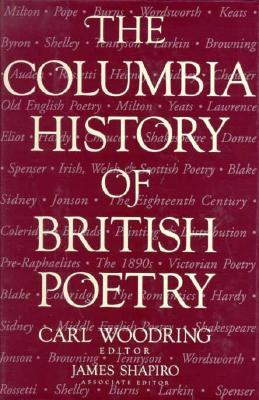 The Columbia Anthology of British Poetry brings together the most remarkable verse written in the British Isles over the course of the past twelve centuries, offering the greatest diversity of poetic voices in any anthology of its kind. From Shakespeare's memorable sonnets to Keats's haunting odes to T.S. Eliot's mediations on the conditions of modern life, the collection contains many of the best-loved treasures of British poetry. Longer and much-celebrated poems that rarely find their way into anthologies-including Pope's "Rape of the Lock" and Coleridge's "Rime of the Ancient Mariner"-claim a place in this collection. Queen Elizabeth I, Anne Killigrew, Aphra Behn, Elizabeth Barrett Browning, and Felicia Hemans are among dozens of women writers renowned in their own day and now restored to their rightful prominence. Scottish, Welsh, and Irish poets often excluded from anthologies of British poetry are here as well, including such extraordinary voices as Lady Grisell Baillie, Robert Burns, Hugh MacDiarmid, and Seamus Heaney. The finest contemporary poets are fully represented also, from Thom Gunn to Eavan Boland. The result is an amazingly rich and wide-ranging conversation among British poets that transcends the boundaries of time and place. Carl Woodring and James Shapiro, the team scholars who edited The Columbia History of British Poetry, have written incisive introductions to the careers of the poets, making this the most accessible and comprehensive anthology of British verse in print. Covering the new and the ancient, the classic and the rediscovered, this generous volume reimagines the horizons of British poetry.