The Colloquy of Montbéliard: Religion and Politics in the Sixteenth Century - National Humanities Center 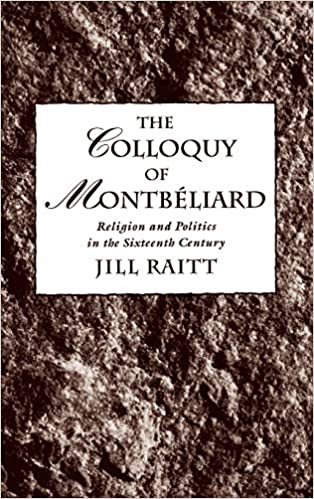 Focusing on the Colloquy of Montbéliard, a theological debate in 1586 between Lutherans and Calvinists, Raitt explores the complex array of shifting political alliances and religious tensions which characterized the Holy Roman Empire after the Peace of Augsburg. When the Wars of Religion broke out in France, both sides courted allies. Often these alliances involved confessional tests--most often concerning the Eucharist. Modern readers might expect that such complex theological questions belong in seminaries, but in many cases, they took place at the request of people and princes. On the outcome of these debates depended the well-being of towns and villages as well as the disposition of troops and the conduct of wars. Raitt's study of the "age of confessionalism" uncovers the background and details of the Colloquy of Monteb((e'))liard and analyzes the nature and implications of the underlying theological conflict.