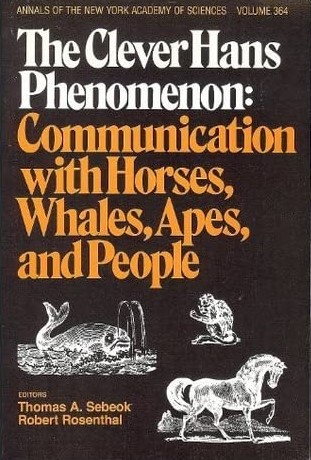 Ever since the Byzantine Empire was ruled by Justinian there have been reports of clever animals. But no animal intelligence so captured the imagination of laymen and scholar alike as that attributed to Clever Hans, the horse of Mr. von Osten. Hans gave every evidence of being able to add and subtract, multiply and divide, read and spell; and he could solve problems of musical harmony. Hans communicated with his questioners by converting all answers into a number of tapping out that number with his foot. Clever Hans constitutes a famous "case" in the history of psychology and it has offered many lessons to those who have examined its details. But as its lessons are many, so are the views and perspectives of those who studied these lessons and written about them. As we shall see in the volume that lies ahead, the major lesson of Clever Hans is something inkblot. Clever Hans Phenomenon: Communication With Horses, Whales, and People is a series of papers on this phenomenon as presented at a scientific conference on the subject. Scholarly, enlightening and entertaining for any one interested in psychology, animal and human.