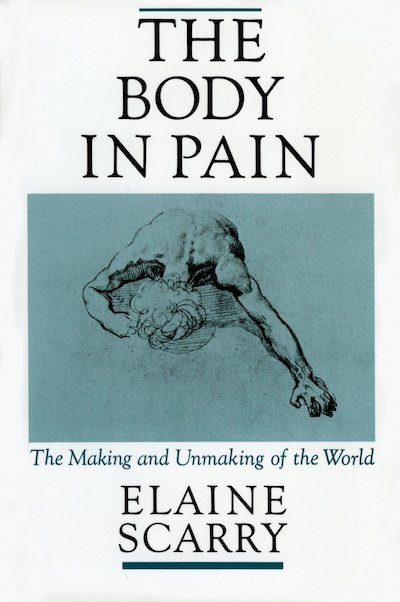 Part philosophical meditation, part cultural critique, The Body in Pain is a profoundly original study that has already stirred excitement in a wide range of intellectual circles. The book is an analysis of physical suffering and its relation to the numerous vocabularies and cultural forces--literary, political, philosophical, medical, religious--that confront it.

Elaine Scarry bases her study on a wide range of sources: literature and art, medical case histories, documents on torture compiled by Amnesty International, legal transcripts of personal injury trials, and military and strategic writings by such figures as Clausewitz, Churchill, Liddell Hart, and Kissinger, She weaves these into her discussion with an eloquence, humanity, and insight that recall the writings of Hannah Arendt and Jean-Paul Sartre.

Scarry begins with the fact of pain's inexpressibility. Not only is physical pain enormously difficult to describe in words--confronted with it, Virginia Woolf once noted, "language runs dry"--it also actively destroys language, reducing sufferers in the most extreme instances to an inarticulate state of cries and moans. Scarry analyzes the political ramifications of deliberately inflicted pain, specifically in the cases of torture and warfare, and shows how to be fictive. From these actions of "unmaking" Scarry turns finally to the actions of "making"--the examples of artistic and cultural creation that work against pain and the debased uses that are made of it. Challenging and inventive, The Body in Pain is landmark work that promises to spark widespread debate.