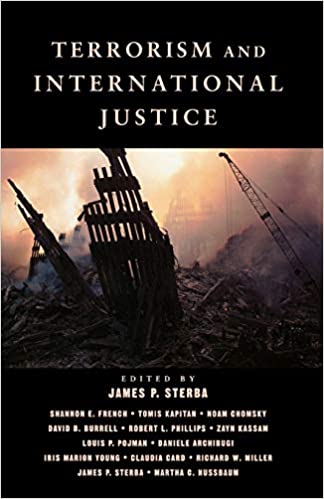 Since 9/11, we need to better understand the terrorism we face and reflect upon how we should best respond to it. Edited by James P. Sterba, this collection of new essays on terrorism and international justice focuses on three central questions: What is the nature and rhetoric of terrorism? Who are the terrorists and why do they hate? and What is a morally justified response to terrorism? Prominent philosophers and political thinkers--including Shannon E. French, Tomis Kapitan, Noam Chomsky, David B. Burrell, Robert L. Phillips, Zayn Kassam, Louis P. Pojman, Daniele Archibugi, Iris Marion Young, Claudia Card, Richard W. Miller, Martha C. Nussbaum, and Sterba himself--provide diverse perspectives on these and other related questions. The first post-9/11 collection of primarily philosophical articles on this topic, Terrorism and International Justice is ideal for courses in moral problems and ethics, social and political philosophy, war and terrorism, international relations and foreign policy, and peace studies. It will also interest anyone who wants to delve more deeply into the philosophical issues of the post-9/11 world.