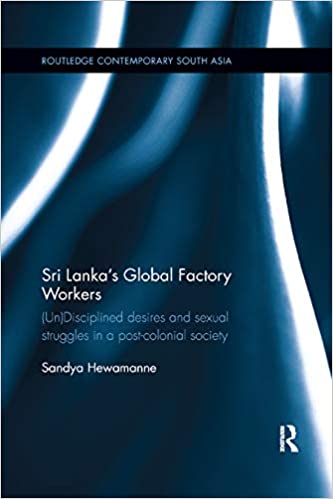 In Sri Lanka, the Free Trade Zone (FTZ) employs thousands of unmarried rural women, and their migration has aroused deep anxieties over female morality and ideal conduct. This book focuses on the global factory workers based in the FTZ, and analyzes intersections of gender, class and sexuality by looking at the sexual lives and struggles of the female workers.

Exploring the alternative sexual world created by Sri Lanka’s female global factory workers who engage in practices—such as premarital sex, unmarried cohabitation, and, to a lesser extent, lesbianism—that mainstream Sinhalese Buddhist culture considers taboo, the author demonstrates that the articulations of good and bad women in relation to sexual behavior has rendered global workers’ sexual lives "unutterable," leading to zones of silence, contradictory articulations and performances. Taking the reader into the forbidden zones of sexual discourses, choices, acts, and texts enacted and expressed in visible arenas yet remain unseen, unread or misread by onlookers, the book critically investigate how cultural, economic and political processes are implicated in the construction and expression of working class female sexualities.

An important contribution to the field of gender studies, the book addresses issues surrounding sexuality, particularly how it is shaped by global production networks as well as patriarchal nationalist projects. It is of interest to students and scholars of South Asian Studies and Gender Studies.