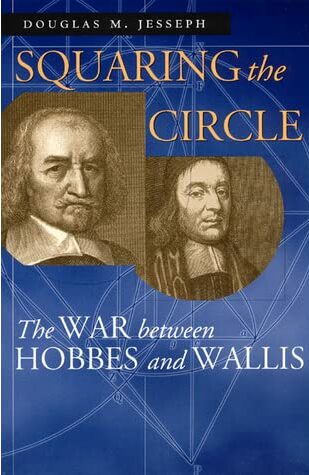 Chicago: The University of Chicago Press, 1999

In 1655, the philosopher Thomas Hobbes claimed he had solved the centuries-old problem of "squaring of the circle" (constructing a square equal in area to a given circle). With a scathing rebuttal to Hobbes’s claims, the mathematician John Wallis began one of the longest and most intense intellectual disputes of all time. Squaring the Circle is a detailed account of this controversy, from the core mathematics to the broader philosophical, political, and religious issues at stake.

Hobbes believed that by recasting geometry in a materialist mold, he could solve any geometric problem and thereby demonstrate the power of his materialist metaphysics. Wallis, a prominent Presbyterian divine as well as an eminent mathematician, refuted Hobbes’s geometry as a means of discrediting his philosophy, which Wallis saw as a dangerous mix of atheism and pernicious political theory.

Hobbes and Wallis’s "battle of the books" illuminates the intimate relationship between science and crucial seventeenth-century debates over the limits of sovereign power and the existence of God.

Jesseph, Douglas M. (NHC Fellow, 1993–94). Squaring the Circle: The War Between Hobbes and Wallis. Science and Its Conceptual Foundations. Chicago: The University of Chicago Press, 1999.