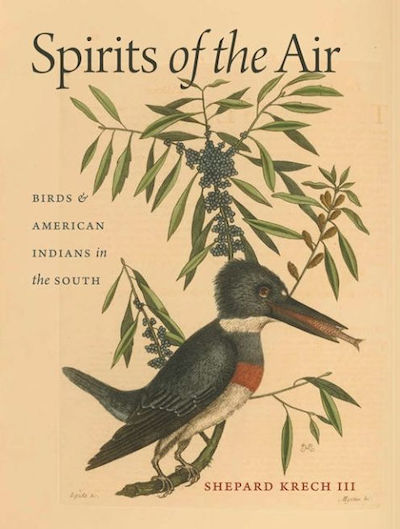 Before the massive environmental change wrought by the European colonization of the South, hundreds of species of birds filled the region's flyways in immeasurable numbers. Before disease, war, and displacement altered the South's earliest human landscape, Native Americans hunted and ate birds and made tools and weapons from their beaks, bones, and talons. More significant to Shepard Krech III, Indians adorned themselves with feathers, invoked avian powers in ceremonies and dances, and incorporated bird imagery on pottery, carvings, and jewelry.

Krech, a renowned authority on Native American interactions with nature, reveals as never before the omnipresence of birds in Native American life. From the time of the earliest known renderings of winged creatures in stone and earthworks through the nineteenth century, when Native southerners took part in decimating bird species with highly valued, fashionable plumage, Spirits of the Air examines the complex and changeable influences of birds on the Native American worldview.

We learn of birds for which places and people were named; birds common in iconography and oral traditions; birds important in ritual and healing; and birds feared for their links to witches and other malevolent forces. Still other birds had no meaning for Native Americans. Krech shows us these invisible animals too, enriching our understanding of both the Indian-bird dynamic and the incredible diversity of winged life once found in the South. A crowning work drawing on Krech's distinguished career in anthropology and natural history, Spirits of the Air recovers vanished worlds and shows us our own anew.