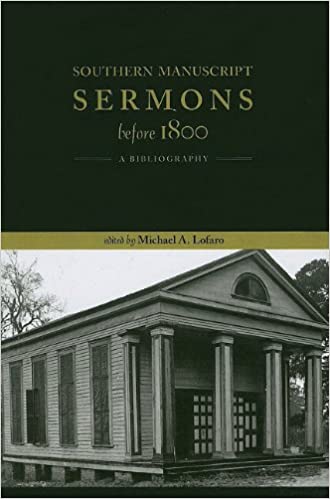 Southern Manuscript Sermons before 1800 is the first guide to the study of the manuscript sermon literature of the Southern colonies/states of Maryland, Virginia, North Carolina, South Carolina, and Georgia. The bibliography contains entries for over 1,600 sermons by over a hundred ministers affiliated with eight denominations. The compilation provides a previously unavailable major tool for research into the early South.

Richard Beale Davis began the bibliography in 1946 as part of his research for Intellectual Life in the Colonial South, 1585-1763, which won the National Book Award in history. Michael A. Lofaro took over the project in 1976, expanded the colonial entries (pre-1764), and added the period of 1764-1799. George M. Barringer contributed entries for Jesuit sermons. Sandra G. Hancock contributed those for Thomas Cradock.

Scholars can employ both versions of this tool to construct a more complete picture of the southern mind before 1800 and to reveal how that mind contributes to a national ethos. The bibliography will aid many disciplines—religion, cultural and American studies, history, literature, political science, sociology, psychology, and more—and all those who wish to interpret the past and its effect upon the present. It will lead to a more balanced appraisal of American intellectual history by encouraging access to a large body of southern sermons to place alongside those of the northern and middle states for critical assessment.