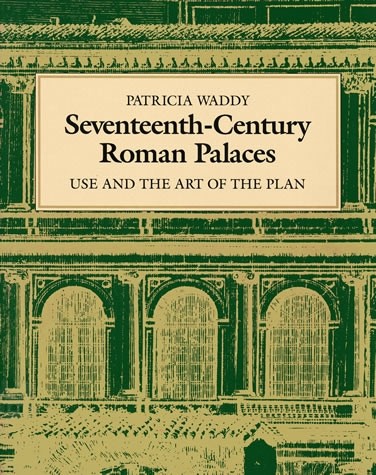 "Buildings have lives in time," observes Patricia Waddy in this pioneering study of the relation between plan and use in the palaces of the Borghese, Barberini, and Chigi families. Waddy reconstructs what was done at precise moments in a building's life, relating these acts of building to the needs and purposes of the owners and offering a rich understanding of architectural activity in seventeenth-century Rome.In its analysis of the relation between plan and use over the course of several decades, Seventeenth-Century Roman Palaces provides a valuable measure for estimating architectural changes over time and a basis for reevaluating seventeenth-century design skills. It is also a fascinating account that shows how the requirements of a hierarchical diplomatic society, whose leaders were celibate churchmen, intersected with a tradition of plasticity, flexibility, and revision in the architecture of Rome's major palaces. Waddy first delves into the complex workings of the household to conceptualize a general program for any large Roman palace of the period. She explains the intricate relationships between design and use at a time when elaborate rules of behavior governed the flow of aristocratic life. The activities of households requiring as many as one hundred staff are examined in lively detail as Waddy describes the specialized workplaces and living quarters, the segregated residences for the family's noblewomen and their attendants, seasonal apartments, the circulation of carriages and people, and the settings that reflected the patron's special interests—varying from theater and ball games to art and bathing. She then considers five palaces commissioned by families at the pinnacle of Roman society. The architects range from the well-known Carlo Maderno and Gianlorenzo Bernini to others who are barely remembered.