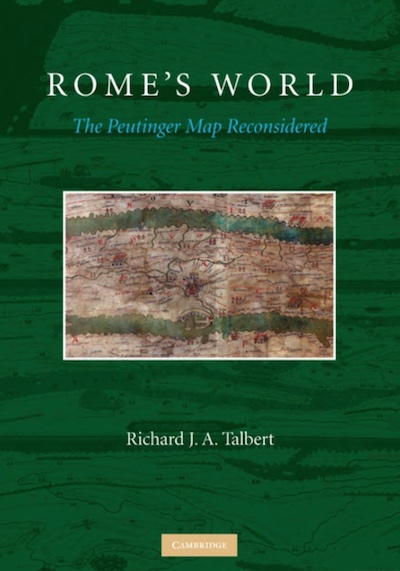 The Peutinger Map is the only map of the Roman world to come down to us from antiquity. An elongated masterpiece, full of colorful detail and featuring land routes across Europe, North Africa, and the Near East, it was rediscovered mysteriously around 1500 and then came into the ownership of Konrad Peutinger, for whom it is named. Today it is among the treasures of the Austrian National Library in Vienna. Richard Talbert’s study presented in Rome’s World: The Peutinger Map Reconsidered offers a long-overdue reinterpretation and appreciation of the map as a masterpiece of both mapmaking and imperial Roman ideology. Here, the ancient world’s traditional span, from the Atlantic to India, is dramatically remolded; lands and routes take pride of place, whereas seas are compressed. Talbert posits that the map’s true purpose was not to assist travelers along Rome’s highways, but rather to celebrate the restoration of peace and order by Diocletian’s Tetrarchy. Such creative cartography, he shows, influenced the development of medieval mapmaking. With the aid of an interactive database, this book enables readers to engage with the Peutinger Map in all of its fascinating immensity more closely than ever before.