Religious Intolerance, America, and the World: A History of Forgetting and Remembering - National Humanities Center 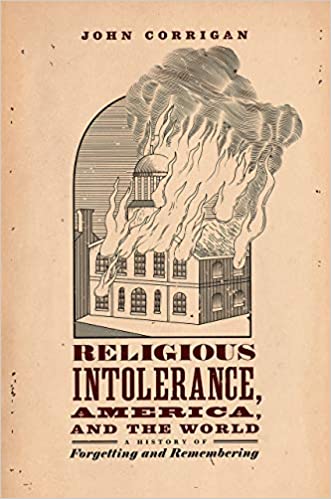 Chicago: The University of Chicago Press, 2020

As the news shows us every day, contemporary American culture and politics are rife with people who demonize their enemies by projecting their own failings and flaws onto them. But this is no recent development. Rather, as John Corrigan argues here, it’s an expression of a trauma endemic to America ’s history, particularly involving our long domestic record of religious conflict and violence.

Religious Intolerance, America, and the World spans from Christian colonists’ intolerance of Native Americans and the role of religion in the new republic’s foreign-policy crises to Cold War witch hunts and the persecution complexes that entangle Christians and Muslims today. Corrigan reveals how US churches and institutions have continuously campaigned against intolerance overseas even as they’ve abetted or performed it at home. This selective condemnation of intolerance, he shows, created a legacy of foreign policy interventions promoting religious freedom and human rights that was not reflected within America’s own borders. This timely, captivating book forces America to confront its claims of exceptionalism based on religious liberty—and perhaps begin to break the grotesque cycle of projection and oppression.

Corrigan, John (NHC Fellow, 2014–15). Religious Intolerance, America, and the World: A History of Forgetting and Remembering. Chicago: The University of Chicago Press, 2020.