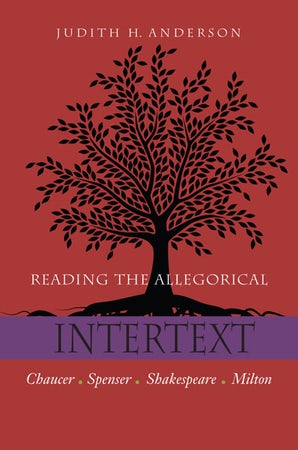 Judith H. Anderson conceives the intertext as a relation between or among texts that encompasses both Kristevan intertextuality and traditional relationships of influence, imitation, allusion, and citation. Like the Internet, the intertext is a state, or place, of potential expressed in ways ranging from deliberate emulation to linguistic free play. Relatedly, the intertext is also a convenient fiction that enables examination of individual agency and sociocultural determinism. Anderson’s intertext is allegorical because Spenser’s Faerie Queene is pivotal to her study and because allegory, understood as continued or moving metaphor, encapsulates, even as it magnifies, the process of signification. Her title signals the variousness of an intertext extending from Chaucer through Shakespeare to Milton and the breadth of allegory itself. Literary allegory, in Anderson’s view, is at once a mimetic form and a psychic one—a process thinking that combines mind with matter, emblem with narrative, abstraction with history.

Anderson’s first section focuses on relations between Chaucer’s Canterbury Tales and Spenser’s The Faerie Queene, including the role of the narrator, the nature of the textual source, the dynamics of influence, and the bearing of allegorical narrative on lyric vision. The second centers on agency and cultural influence in a variety of Spenserian and medieval texts. Allegorical form, a recurrent concern throughout, becomes the pressing issue of section three. This section treats plays and poems of Shakespeare and Milton and includes two intertextually relevant essays on Spenser.

How Paradise Lost or Shakespeare’s plays participate in allegorical form is controversial. Spenser’s experiments with allegory revise its form, and this intervention is largely what Shakespeare and Milton find in his poetry and develop. Anderson’s book, the result of decades of teaching and writing about allegory, especially Spenserian allegory, will reorient thinking about fundamental critical issues and the landmark texts in which they play themselves out.