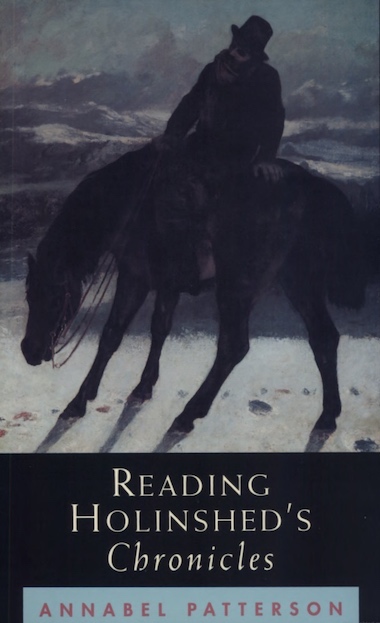 Chicago: The University of Chicago Press, 1994

Reading Holinshed’s Chronicles is the first major study of the greatest of the Elizabethan chronicles. Holinshed’s Chronicles—a massive history of England, Scotland, and Ireland—has been traditionally read as the source material for many of Shakespeare’s plays or as an archaic form of history-writing. Annabel Patterson insists that the Chronicles be read in their own right as an important and inventive cultural history.

Although we know it by the name of Raphael Holinshed, editor and major compiler of the 1577 edition, the Chronicles was the work of a group, a collaboration between antiquarians, clergymen, members of parliament, poets, publishers, and booksellers. Through a detailed reading, Patterson argues that the Chronicles convey rich insights into the way the Elizabethan middle class understood their society. Responding to the crisis of disunity which resulted from the Reformation, the authors of the Chronicles embodied and encouraged an ideal of justice, what we would now call liberalism, that extended beyond the writing of history into the realms of politics, law, economics, citizenship, class, and gender. Also, since the second edition of 1587 was called in by the Privy Council and revised under supervision, the work constitutes an important test case for the history of early modern censorship.

An essential book for all students of Tudor history and literature, Reading Holinshed’s Chronicles brings into full view a long misunderstood masterpiece of sixteenth-century English culture.