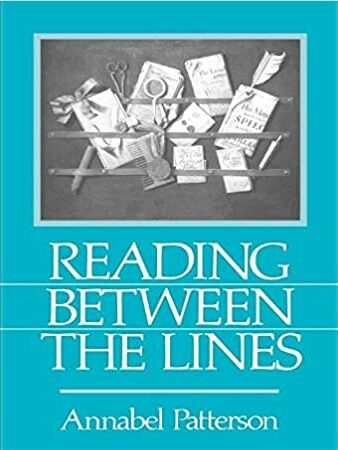 For those exhausted by the highly charged debates and polarized climate of literary studies today, Annabel Patterson’s Reading Between the Lines offers a strategic compromise: a moderate stance between the radical opponents and the zealous protectors of the traditional Western canon. She reconsiders the value of reading the white, male, canonical writers of antiquity and of early modern England, finding in them a set of values different from those supposed by both sides in the Great Books quarrel. Rather than being the unthinking or deliberate promoters of political or cultural uniformity, these writers subjected such conventional notions to critical scrutiny and even promoted alternatives. The key to this revisionary argument is “reading between the lines,” a strategy usually associated with the eccentric conservativism of Leo Strauss, but which, Patterson shows, is not only implicit in all acts of interpretation, but played a particularly important role in an age when writing between the lines was often essential for the writer’s survival.

Patterson argues that, if we learn how to read those old and seemingly alien texts, which themselves responded to rapid and unsettling change in the arenas of religion, politics, and education, they have much that is liberating to tell us about our own expanding culture, including the importance of republican constitutionalism, freedom of speech, and civic and religious toleration. This salutary redefinition of “humanism” arises from Patterson’s essays on Plato, Spenser, Shakespeare, Donne, and Milton; but the book also deals with the “gendered” topics of rape and divorce and with “popular culture” in the sixteenth century and today. These interests are not on opposite sides of some theoretical boundary, but (as Patterson demonstrates from contemporary novels by Joseph Heller and Nancy Price) interdependent.