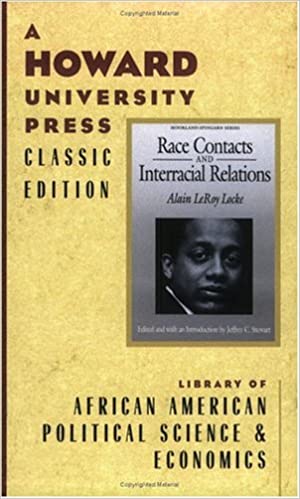 Race Contacts and Interracial Relations comprises five lectures that Alain Locke, Howard University professor of philosophy and critic of the Harlem Renaissance, delivered in 1916 at Howard University. Locke examines race and racism in twentieth-century social relations and provides a means of analyzing race and ethnic conflict in relation to economic and political changes in society. He suggests that a way to understand racial conflict is to look at nonracial issues that divide a society and at how race becomes a symbol of those issues and conflicts.
Locke's early recognition and articulation of Franz Boas's theory of race in these lectures and his contention that racism is socially generated were intellectual departures at the time. While rejecting the biological basis of race, Locke proposes that the social concept of race could be employed by a minority as a cultural strategy for self-help and self-definition. Thus the lectures show that Locke's work in African American art and culture grew out of a considered analysis of race and modern society.
In the introduction to this carefully edited volume, Jeffrey Stewart provides background on Alain Locke and other theorists on race whom Locke discusses, situates Locke's ideas on race within the context of his time, and relates Locke's lectures to his thought on art and culture and to contemporary arguments on race.