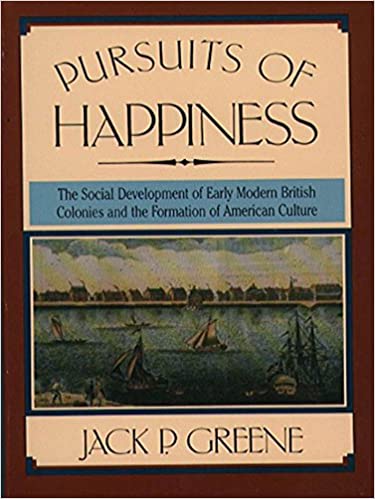 In this book, Jack Greene reinterprets the meaning of American social development. Synthesizing literature of the previous two decades on the process of social development and the formation of American culture, he challenges the central assumptions that have traditionally been used to analyze colonial British American history.

Greene argues that the New England declension model traditionally employed by historians is inappropriate for describing social change in all the other early modern British colonies. The settler societies established in Ireland, the Atlantic island colonies of Bermuda and the Bahamas, the West Indies, the Middle Colonies, and the Lower South followed instead a pattern first exhibited in America in the Chesapeake. That pattern involved a process in which these new societies slowly developed into more elaborate cultural entities, each of which had its own distinctive features.

Greene also stresses the social and cultural convergence between New England and the other regions of colonial British America after 1710 and argues that by the eve of the American Revolution Britain's North American colonies were both more alike and more like the parent society than ever before. He contends as well that the salient features of an emerging American culture during these years are to be found not primarily in New England puritanism but in widely manifest configurations of sociocultural behavior exhibited throughout British North America, including New England, and he emphasized the centrality of slavery to that culture.