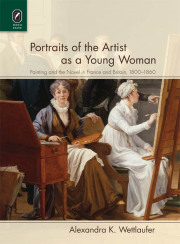 As women entered the field of cultural production in unprecedented numbers in nineteenth-century France and Britain, they gradually forged a place for themselves, however tenuous, in artistic movements and exhibitions, in academies and salons, and finally in the public imagination. Portraits of the Artist as a Young Woman: Painting and the Novel in France and Britain, 1800–1860 focuses on a decisive period in that process of professional self-invention and maps out the concrete and symbolic roles played by women painters, real and fictional, in the construction of female artistic identity in the aesthetic and the public spheres. Alexandra K. Wettlaufer examines the diverse and complex ways canonical and non-canonical women painters and novelists—including Anne Brontë, Sydney Owenson, Margaret Gillies, Marceline Desbordes-Valmore, George Sand, and Hortense Haudebourt-Lescot—figured and brought forth the radical image of a female subject representing the world. Wettlaufer brings to light a rich and nearly forgotten culture of women’s artistic production, allowing us to understand the nineteenth-century in more complex and nuanced ways across the borders of gender, genre, and nation. In her close readings of paintings by women and novels about women painting, she charts the political and cultural resonances of this artistic self-representation, tracing its evolution through themes of “The Studio” (Part I), “Cosmopolitan Visions” (Part II), and “The Portrait” (Part III). By pairing painting and literature in a single study that also considers works from two distinct but closely related cultures, Portraits of the Artist as a Young Woman locates the interpretation of these works in the dialogic context in which they were created and consumed, highlighting aesthetic and political intersections between nineteenth-century British and French art, literature, and feminism that are too often elided by the disciplinary boundaries of scholarship.