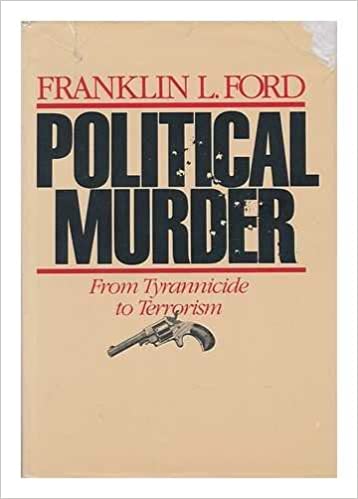 Are there similarities between the killings of the Gracchi brothers and the Kennedy brothers? Does the Baader-Meinhof terrorist gang have roots in the rightist murder teams of Weimar Germany? Was political context as important to the crucifixion of Jesus as to the death of Martin Luther King in 1968? Are political murders usually produced by elaborate conspiracies, or are they more often the work of lone assassins? What circumstances and impulses motivate an individual to risk his or her own life to kill another for reasons of state? This fast-paced narrative, interspersed with reflections, finds intriguing implications in a multitude of famous cases.

From the first known case of political murder, Ehud the Benjamite’s stabbing of Eglon, to the recent gunning down of Indira Gandhi by two trusted Sikh bodyguards, the frequency of such acts has varied greatly over time. Mainland Greece suffered few political murders in the violent century of Pericles. The Romans, despite their bloody record under the Empire, avoided assassination for almost four hundred years under the Republic. There was a third such “remission” during the twelfth and thirteenth centuries, Europe’s high Middle Ages, matched by yet another extending from 1650 to 1789. In the interval between, the sixteenth century was an especially violent time in countries such as Scotland, the Netherlands, and France. Assassination and terrorism increased again after 1815, but the nineteenth century did not come close to equaling the twentieth in the number of brutal episodes.

Ford’s exploration of calculated, personalized assassination draws on history, literature, law, philosophy, sociology, and religion. Addressing the vast array of cases and combing thousands of years of history, he asks most of all whether assassination works. Does it, in even a minority of cases, produce results consistent with the aims of those who attempt it? Can it forestall evil acts or prevent irreparable damage inflicted by misguided leaders? Or is it “bad politics” in every sense of the term? The questions are large ones, and this book offers a sophisticated basis for seeking answers.