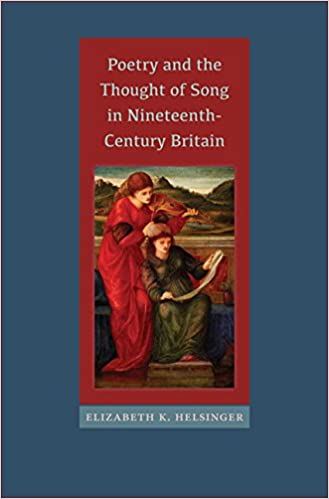 In arguing for the crucial importance of song for poets in the long nineteenth century, Elizabeth Helsinger focuses on both the effects of song on lyric forms and the mythopoetics through which poets explored the affinities of poetry with song. Looking in particular at individual poets and poems, Helsinger puts extensive close readings into productive conversation with nineteenth-century German philosophic and British scientific aesthetics. While she considers poets long described as "musical"—Alfred, Lord Tennyson, Gerard Manly Hopkins, Emily Brontë, and Algernon Charles Swinburne—Helsinger also examines the more surprising importance of song for those poets who rethought poetry through the medium of visual art: Dante Gabriel Rossetti, William Morris, and Christina Rossetti. In imitating song’s forms and sound textures through lyric’s rhythm, rhyme, and repetition, these poets were pursuing song’s "thought" in a double sense. They not only asked readers to think of particular kinds of song as musical sound in social performance (ballads, national airs, political songs, plainchant) but also invited readers to think like song: to listen to the sounds of a poem as it moves minds in a different way from philosophy or science. By attending to the formal practices of these poets, the music to which the poets were listening, and the stories and myths out of which each forged a poetics that aspired to the condition of music, Helsinger suggests new ways to think about the nature and form of the lyric in the nineteenth century.