Picture Titles: How and Why Western Paintings Acquired Their Names - National Humanities Center 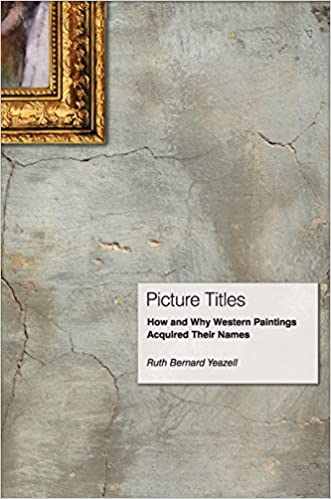 A picture’s title is often our first guide to understanding the image. Yet paintings didn’t always have titles, and many canvases acquired their names from curators, dealers, and printmakers—not the artists. Taking an original, historical look at how Western paintings were named, Picture Titles shows how the practice developed in response to the conditions of the modern art world and how titles have shaped the reception of artwork from the time of Bruegel and Rembrandt to the present.

Ruth Bernard Yeazell begins the story with the decline of patronage and the rise of the art market in the seventeenth and eighteenth centuries, as the increasing circulation of pictures and the democratization of the viewing public generated the need for a shorthand by which to identify works at a far remove from their creation. The spread of literacy both encouraged the practice of titling pictures and aroused new anxieties about relations between word and image, including fears that reading was taking the place of looking. Yeazell demonstrates that most titles composed before the nineteenth century were the work of middlemen, and even today many artists rely on others to name their pictures. A painter who wants a title to stick, Yeazell argues, must engage in an act of aggressive authorship. She investigates prominent cases, such as David’s Oath of the Horatii and works by Turner, Courbet, Whistler, Magritte, and Jasper Johns.

Examining Western painting from the Renaissance to the present day, Picture Titles sheds new light on the ways that we interpret and appreciate visual art.