People of the Plow: An Agricultural History of Ethiopia, 1800-1990 - National Humanities Center 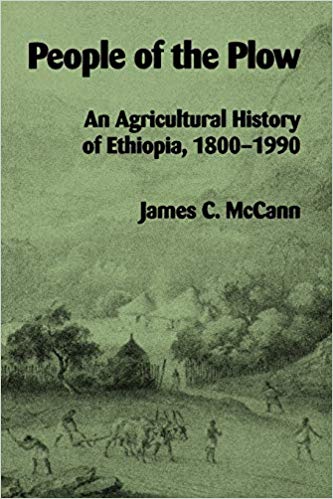 For more than two thousand years, Ethiopia’s ox-plow agricultural system was the most efficient and innovative in Africa, but has been afflicted in the recent past by a series of crises: famine, declining productivity, and losses in biodiversity. James C. McCann analyzes the last two hundred years of agricultural history in Ethiopia to determine whether the ox-plow agricultural system has adapted to population growth, new crops, and the challenges of a modern political economy based in urban centers.

This agricultural history is set in the context of the larger environmental and landscape history of Ethiopia, showing how farmers have integrated crops, tools, and labor with natural cycles of rainfall and soil fertility, as well as with the social vagaries of changing political systems. McCann traces characteristic features of Ethiopian farming, such as the single-tine scratch plow, which has retained a remarkably consistent design over two millennia, and a crop repertoire that is among the most genetically diverse in the world.

People of the Plow provides detailed documentation of Ethiopian agricultural practices since the early nineteenth century by examining travel narratives, early agricultural surveys, photographs and engravings, modern farming systems research, and the testimony of farmers themselves, collected during McCann's five years of fieldwork. He then traces the ways those practices have evolved in the twentieth century in response to population growth, urban markets, and the presence of new technologies.