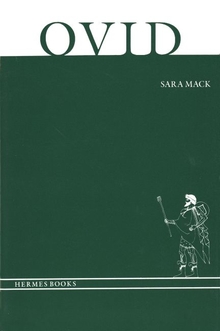 Of all the poets of ancient Rome Ovid had perhaps the most influence on the art and literature of Medieval and Renaissance Europe.  Even today he is probably the most accessible of all classical poets to the non-specialist, both in his subject matter and in his style.  Ovid is no less fascinated than we are by the human psyche and by the ways men and women relate to each other, and many of his views on these questions seem centuries ahead of his time.

Ovid’s interest in narrative technique is so much like ours that modern critical terms such as “reader-response” could have been coined for his experiments with story telling.  In the creation of different personae and points of view his ingenuity is endless.  For the Amores he invented a posing poet-lover; for the Art of Love, his narrator is a cynical professor of seduction who is convinced, quite wrongly, that he has love down to a science.  In the Heroides, a series of verse-letters from the famous women of legend to their lovers, he brilliantly recreated great moments of heroic mythology from the feminine point of view.  The longest and most enchanting of his works, the Metamorphoses, an epic-length poem on the infinite changes of mythology and history, afforded him the richest opportunities of all to experiment with narrative techniques.

In this book Sara Mack introduces Ovid to the general reader.  After considering Ovid’s modernity, Mack surveys his poetry chronologically.  Next she examines his most influential poems: the Amores, Heroides, Art of Love, and Metamorphoses.  Finally she explores Ovidian wit, concluding with a look at Ovid’s influence on the arts.