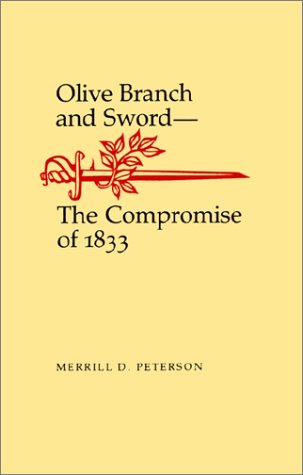 Dominated by the personalities of three towering figures of the nation’s middle period—Henry Clay, John C. Calhoun, and President Andrew Jackson—Olive Branch and Sword: The Compromise of 1833 tells of the political and rhetorical dueling that brought about the Compromise of 1833, resolving the crisis of the Union caused by South Carolina’s nullification of the protective tariff.

In 1832 South Carolina’s John C. Calhoun denounced the entire protectionist system as unconstitutional, unequal, and founded on selfish sectional interests. Opposing him was Henry Clay, the Kentucky senator and champion of the protectionists. Both Calhoun and Clay had presidential ambitions, and neither could agree on any issue save their common opposition to President Jackson, who seemed to favor a military solution to the South Carolina problem. It was only when Clay, after the most complicated maneuverings, produced the Compromise of 1833 that he, Calhoun, and Jackson could agree to coexist peaceably within the Union.

The compromise consisted of two key parts. The Compromise Tariff, written by Clay and approved by Calhoun, provided for the gradual reduction of duties to the revenue level of 20 percent. The Force Bill, enacted at the request of President Jackson, authorized the use of military force, if necessary, to put down nullification in South Carolina. The two acts became, respectively, the olive branch and the sword of the compromise that preserved the peace, the Union, and the Constitution in 1833.

A careful study of what has become a neglected event in American political history, Merrill D. Peterson’s work spans a period of over thirty years—sketching the background of national policy out of which nullification arose, detailing the explosive events of 1832 and 1833, and then tracing the consequences of the compromise through the dozen or so years that it remained in public controversy. Considering as well the larger question of decision making and policy making in the Jacksonian republic, Peterson nonetheless never loses sight of the crucial role played by the ambitions, whims, and passions of such men as Calhoun, Clay, and Jackson in determining the course of history.