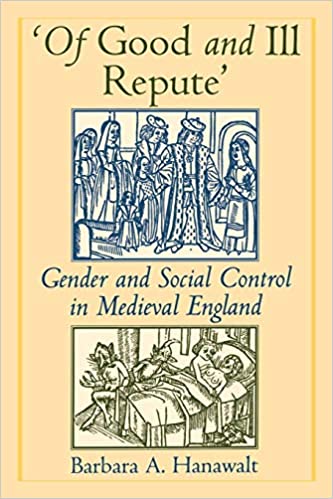 To be labeled "of ill repute" in medieval society implied that a person had committed a violation of accepted standards and had stepped beyond the bounds of permissible behavior. To have a reputation "of good repute", however, was so powerful as to help a person accused of a crime be acquitted by his or her fellow peers. Labeling a person in medieval times was a complex matter. Often, unwritten codes of behavior determined who was of good repute and who was not. Members of the nobility committing a "fur-collar crime" might have considerable leeway to oppress their neighbors with violence and legal violations; however, a woman caught without appropriate attire and without the proper escort hazarded the label of a "woman of ill repute." Gender, class, social statutes, wealth, connections, bribes, friends, and the community all played a role in how quickly or how permanently a person's reputation was damaged.

'Of Good and Ill Repute' examines the complex social regulations and stigmatizations that medieval society used to arrive at its decisions about condemnation and exoneration. In eleven interrelated essays, including three previously unpublished works, Hanawalt explores how social control was maintained in Medieval England in the later Middle Ages. Focusing on gender, criminal behavior, law enforcement, arbitration, and cultural rituals of inclusion and exclusion, 'Of Good and Ill Repute' reflects the most current scholarship on medieval legal history, cultural history, and gender studies. It looks at the medieval sermons, advice books, manuals of penance, popular poetry, laws, legal treatises, court records, and city and guild ordinances that drew the lines between good and bad behavior. Written in a lively, accessible, and jargon-free style, this text is essential for upper level undergraduate history courses on medieval history and women's history as well as for English courses on medieval literature.