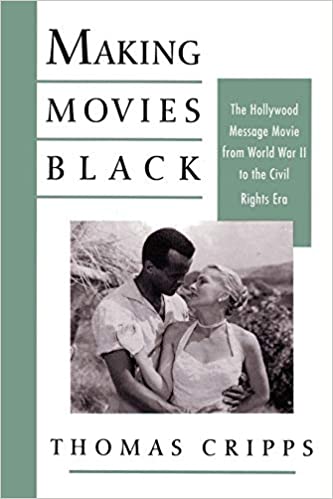 This is the second volume of Thomas Cripps's definitive history of African-Americans in Hollywood. It covers the period from World War II through the civil rights movement of the 1960s, examining this period through the prism of popular culture. Making Movies Black shows how movies anticipated and helped form America's changing ideas about race. Cripps contends that from the liberal rhetoric of the war years--marked as it was by the propaganda catchwords brotherhood and tolerance--came movies that defined a new African-American presence both in film and in American society at large. He argues that the war years, more than any previous era, gave African-American activists access to centers of cultural influence and power in both Washington and Hollywood.

Among the results were an expanded black imagery on the screen during the war--in combat movies such as Bataan, Crash Dive, and Sahara; musicals such as Stormy Weather and Cabin in the Sky; and government propaganda films such as The Negro Soldier and Wings for this Man (narrated by Ronald Reagan!). After the war, the ideologies of both black activism and integrationism persisted, resulting in the 'message movie' era of Pinky, Home of the Brave, and No Way Out, a form of racial politics that anticipated the goals of the Civil Rights Movement.

Delving into previously inaccessible records of major Hollywood studios, among them Warner Bros., RKO, and 20th Century-Fox, as well as records of the Office of War Information in the National Archives, and records of the NAACP, and interviews with survivors of the era, Cripps reveals the struggle of both lesser known black filmmakers like Carlton Moss and major figures such as Sidney Poitier.

More than a narrative history, Making Movies Black reaches beyond the screen itself with sixty photographs, many never before published, which illustrate the mood of the time. Revealing the social impact of the classical Hollywood film, Making Movies Black is the perfect book for those interested in the changing racial climate in post-World War II American life.