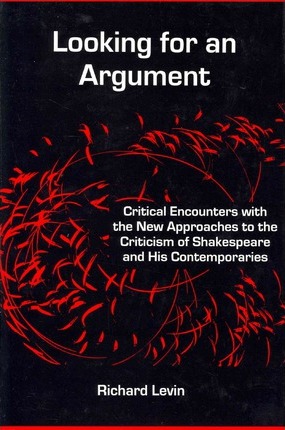 This book collects a number of Richard Levin's essays, beginning with his well-known PMLA article of 1988 on Feminist Thematics and Shakespearean Tragedy and continuing through the 1990s, that examine and evaluate some of the most important aspects of the new critical approaches to the interpretations of the works of Shakespeare and his contemporaries- principally the New Historicism, feminism, and revisionist versions of Marxism and Freudianism. In these essays he is looking not only for rational arguments in these approaches, but also for a rational argument with their practitioners, and therefore he reprints several of the responses that these essays have elicited (including th PMLA Forum letter signed by twenty-four people who objected to Feminist Thematics) along with his answers to them, which contribute to this critique of the present state of the discourse in this field.

Levin, Richard Louis (NHC Fellow, 1987–88). Looking for an Argument: Critical Encounters with the New Approaches to the Criticism of Shakespeare and His Contemporaries. Madison, NJ: Fairleigh Dickinson University Press, 2003.