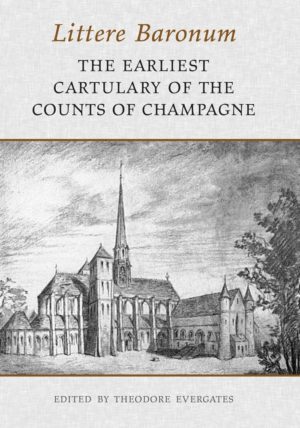 The cartulary of 1211 is the oldest surviving register produced by the chancery of the counts of Champagne. This first edition of the cartulary contains 121 letters received from the barons and prelates of the county during the rule of Count Thibaut III (1198-1201) and the first decade of the regency of his widow, Countess Blanche (1201-22).

They deal primarily with feudal matters–homage, tenure, the construction and rendering of castles--and lordship over property and rural communities. Since only one-third of the original letters survive, the cartulary copies are particularly valuable in capturing the range of written records entering the chancery of a major French principality around 1200.

The introduction to the volume traces the evolution of aristocratic letters patent from the 1140s and argues that they were far more important in the twelfth century, both for transactions between laymen and for transactions with religious houses, than historians of medieval diplomacy have allowed. The introduction goes on to discuss the evolution of the chancery in the twelfth century, the creation of a formal chancery archive in the 1190s, and the organization and contents of the cartulary complied in 1211.