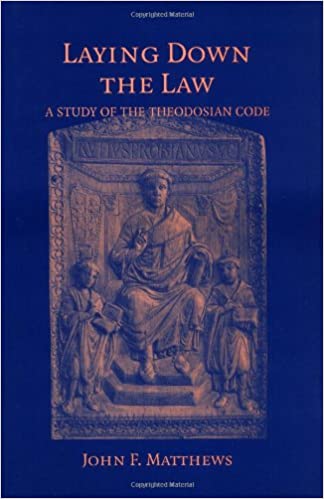 The Theodosian Code—a collection of Roman imperial legislation of the period from Constantine the Great to Theodosius II—is a fundamental source for understanding the legal, social, economic, cultural, and religious history of the later Roman Empire. More than 2,700 of the 3,500 original texts of the Code survive, illuminating issues as wide-ranging as prison conditions and rural patronage, intestate succession, and the pork supply for the city of Rome. Yet no recent study has closely examined how the Code was prepared, and this gap has hindered accurate interpretation. Laying Down the Law offers for the first time a clear and comprehensive guide to the interpretation of the Theodosian Code. John F. Matthews, a leading authority on the late Roman Empire, examines in detail the planning, design, and publication of the Code.

Matthews sets in legal and political context the recognition in the fifth century of the need for a codification of imperial legislation, describes the editorial principles upon which the work was based, and considers how these principles affected the shape of the Code. Combining legal with historical evidence, Matthews shows the Theodosian Code in a new and more accurate light, emphasizing its importance as a prime source of information on the later Roman Empire.