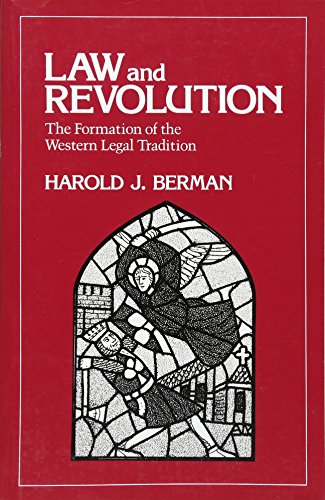 The roots of modern Western legal institutions and concepts go back nine centuries to the Papal Revolution, when the Western church established its political and legal unity and its independence from emperors, kings, and feudal lords. Out of this upheaval came the Western idea of integrated legal systems consciously developed over generations and centuries. Harold J. Berman describes the main features of these systems of law, including the canon law of the church, the royal law of the major kingdoms, the urban law of the newly emerging cities, feudal law, manorial law, and mercantile law. In the coexistence and competition of these systems he finds an important source of the Western belief in the supremacy of law.

Written simply and dramatically, carrying a wealth of detail for the scholar but also a fascinating story for the layman, the book grapples with wide-ranging questions of our heritage and our future. One of its main themes is the interaction between the Western belief in legal evolution and the periodic outbreak of apocalyptic revolutionary upheavals.

Berman challenges conventional nationalist approaches to legal history, which have neglected the common foundations of all Western legal systems. He also questions conventional social theory, which has paid insufficient attention to the origin of modern Western legal systems and has therefore misjudged the nature of the crisis of the legal tradition in the twentieth century.