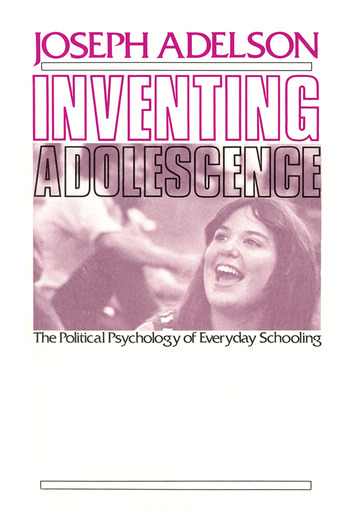 There is a widespread and deep awareness that all is not well with American public education nor with the students, educators, and administrators who are charged with making citizens literate. Joseph Adelson's work has gained considerable prominence in this ongoing reevaluation. Writing with force, verve, and the tools of advanced study, Adelson's book provides what might be the most comprehensive look at American education since the work of Diane Ravitch. The materials include revised and updated versions of essays that caused a real stir when they first appeared in the pages of Commentary, Daedalus, The American Scholar, and The Public Interest, among other places.

The work goes against the grain of rhetoric but quite with the grain of the best in social science: That the erosion of trust in the American young has been far less severe than in the American old, that the degree of pathology, alienation, and rebelliousness in the American adolescent population is far from alarming. On the whole, each and every serious research study shows the vast majority of teenagers to be competent, purposeful, at ease with themselves, and closely bonded to their families and their values. This is, however, no pollyannish version of American education, but a tough-minded critique of educators and administrators who prefer ideological generalities to empirical truths, and whose vested interests are not in the requirements of learning, but ultimately in its subversion. The invention of adolescence was a search for a problem child more nearly detected in problematic adults.