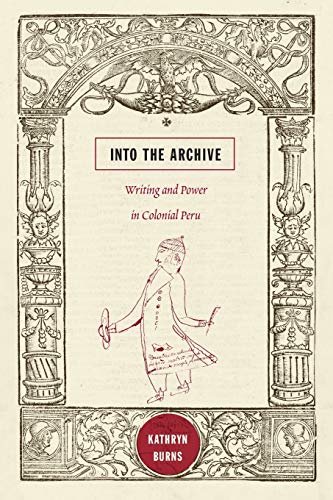 Writing has long been linked to power. For early modern people on both sides of the Atlantic, writing was also the province of notaries, men trained to cast other people’s words in official forms and make them legally true. Thus the first thing Columbus did on American shores in October 1492 was have a notary record his claim of territorial possession. It was the written, notarial word—backed by all the power of Castilian enforcement—that first constituted Spanish American empire. Even so, the Spaniards who invaded America in 1492 were not fond of their notaries, who had a dismal reputation for falsehood and greed. Yet Spaniards could not do without these men. Contemporary scholars also rely on the vast paper trail left by notaries to make sense of the Latin American past. How then to approach the question of notarial truth?

Kathryn Burns argues that the archive itself must be historicized. Using the case of colonial Cuzco, she examines the practices that shaped document-making. Notaries were businessmen, selling clients a product that conformed to local “custom” as well as Spanish templates. Clients, for their part, were knowledgeable consumers, with strategies of their own for getting what they wanted. In this inside story of the early modern archive, Burns offers a wealth of possibilities for seeing sources in fresh perspective.