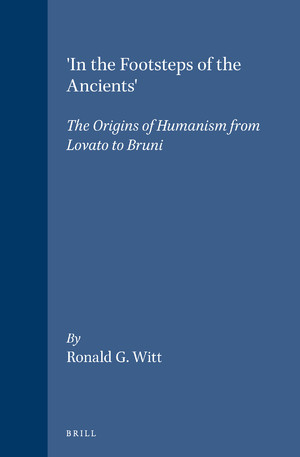 This monograph demonstrates why humanism began in Italy in the mid-thirteenth century. It considers Petrarch a third generation humanist, who christianized a secular movement. The analysis traces the beginning of humanism in poetry and its gradual penetration of other Latin literary genres, and, through stylistic analyses of texts, the extent to which imitation of the ancients produced changes in cognition and visual perception.

The volume traces the link between vernacular translations and the emergence of Florence as the leader of Latin humanism by 1400 and why, limited to an elite in the fourteenth century, humanism became a major educational movement in the first decades of the fifteenth. It revises our conception of the relationship of Italian humanism to French twelfth-century humanism and of the character of early Italian humanism itself.

In the Footsteps of the Ancients is the recipient of the Jacques Barzun Prize 2000 in Cultural History of the American Philosophical Society.

Witt, Ronald G. (NHC Fellow, 1983–84). "In the Footsteps of the Ancients": The Origins of Humanism from Lovato to Bruni. Studies in Medieval and Reformation Thought. Leiden, Netherlands: Brill, 2000.