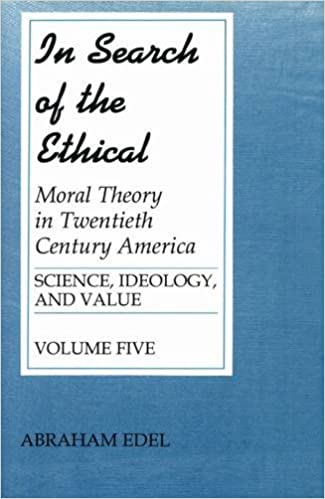 The twentieth century has been rich in the variety of its ethical theories. Since the turn of the century, contending philosophical positions have tended to view ethics either as spiritual and separate from the natural world or as a function of bodily or material forces. Although both factions had roots in older philosophies, the speed and complexity of modern development, in science and technology engendered a multiplicity of smaller schools within traditonal domains. Li the fifth volume of Science, Ideology, and Value, Abraham Edel offers a consideration of some of the major moral theories of this troubled century and a guide to their historical development and context.

In treating the newer and distinctively twentieth-century philosophical schools, Edel concentrates on movements rather than on the individual philosopher's rounded theory. The treatment of John Dewey comes in a chapter on pragmatic tests and ethical insights, while that of Edward Alexander Westermarck comes in a larger discussion of ethical relativism. Edel's consideration of John Rawls and Alasdair Maclntyre provides a broader lesson in the problems and pitfalls of dealing with ethical ideas apart from history and social context.

Edel obse/ves that while the concepts of morality, and the theories in which they are enmeshed, have been familiar subject matter of ethical theory, the one topic that has been little explored is changes over time in ethical practice. While the fact of different moralities and the rise and fall of a given morality have been dealt with in a historical vein, how such changes have impacted the theory of ethics as such has received only limited treatment. Edel devotes significant space to this topic, noting that the study of moral change may yield both a deeper understanding of the functioning of morality within the social culture as well as new vistas on the function of ethical theories themselves.