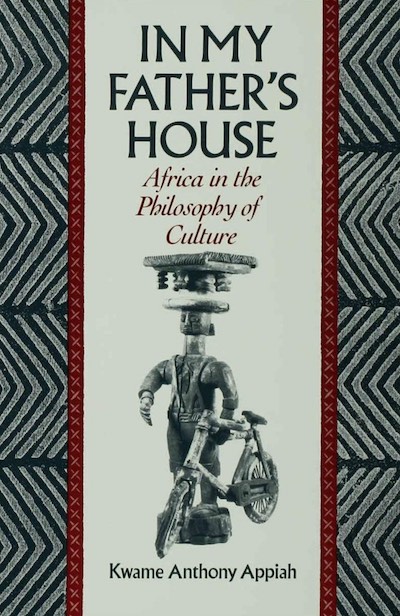 The beating of Rodney King and the resulting riots in South Central Los Angeles. The violent clash between Hasidim and African-Americans in Crown Heights. The boats of Haitian refugees being turned away from the Land of Opportunity. These are among the many racially-charged images that have burst across our television screens in the last year alone, images that show that for all our complacent beliefs in a melting-pot society, race is as much of a problem as ever in America.

In this vastly important, widely-acclaimed volume, Kwame Anthony Appiah, a Ghanaian philosopher who now teaches at Harvard, explores, in his words, "the possibilities and pitfalls of an African identity in the late twentieth century." In the process he sheds new light on what it means to be an African-American, on the many preconceptions that have muddled discussions of race, Africa, and Afrocentrism since the end of the nineteenth century, and, in the end, to move beyond the idea of race.

In My Father's House is especially wide-ranging, covering everything from Pan Africanism, to the works of early African-American intellectuals such as Alexander Crummell and W.E.B. Du Bois, to the ways in which African identity influences African literature. In his discussion of the latter subject, Appiah demonstrates how attempts to construct a uniquely African literature have ignored not only the inescapable influences that centuries of contact with the West have imposed, but also the multicultural nature of Africa itself. Emphasizing this last point is Appiah's eloquent title essay which offers a fitting finale to the volume. In a moving first-person account of his father's death and funeral in Ghana, Appiah offers a brilliant metaphor for the tension between Africa's aspirations to modernity and its desire to draw on its ancient cultural roots.

During the Los Angeles riots, Rodney King appeared on television to make his now famous plea: "People, can we all get along?" In this beautiful, elegantly written volume, Appiah steers us along a path toward answering a question of the utmost importance to us all.