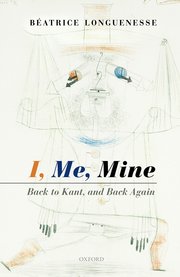 Beatrice Longuenesse presents an original exploration of our understanding of ourselves and the way we talk about ourselves. In the first part of the book she discusses contemporary analyses of our use of 'I' in language and thought, and compares them to Kant's account of self-consciousness, especially the type of self-consciousness expressed in the proposition 'I think.' According to many contemporary philosophers, necessarily, any instance of our use of 'I' is backed by our consciousness of our own body. For Kant, in contrast, 'I think' just expresses our consciousness of being engaged in bringing rational unity into the contents of our mental states. In the second part of the book, Longuenesse analyzes the details of Kant's view and argues that contemporary discussions in philosophy and psychology stand to benefit from Kant's insights into self-consciousness and the unity of consciousness. The third and final part of the book outlines similarities between Kant's view of the structure of mental life grounding our uses of 'I' in 'I think' and in the moral 'I ought to,' on the one hand; and Freud's analysis of the organizations of mental processes he calls 'ego' and 'superego' on the other hand. Longuenesse argues that Freudian metapsychology offers a path to a naturalization of Kant's transcendental view of the mind. It offers a developmental account of the normative capacities that ground our uses of 'I,' which Kant thought could not be accounted for without appealing to a world of pure intelligences, distinct from the empirical, natural world of physical entities.