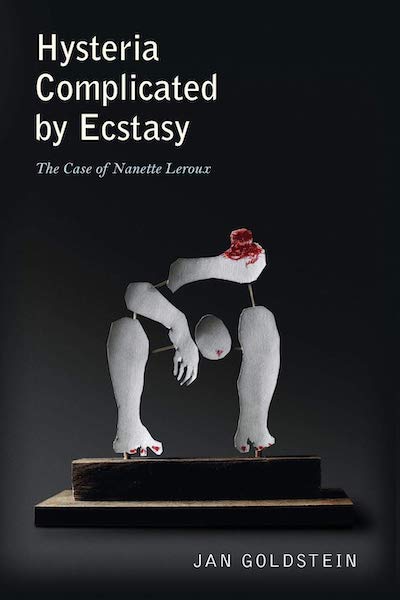 Hysteria Complicated by Ecstasy offers a rare window into the inner life of a person ordinarily inaccessible to historians: a semiliterate peasant girl who lived almost two centuries ago, in the aftermath of the French Revolution. Eighteen-year-old Nanette Leroux fell ill in 1822 with a variety of incapacitating nervous symptoms. Living near the spa at Aix-les-Bains, she became the charity patient of its medical director, Antoine Despine, who treated her with hydrotherapy and animal magnetism, as hypnosis was then called. Jan Goldstein translates, and provides a substantial introduction to, the previously unpublished manuscript recounting Nanette’s strange illness—a manuscript coauthored by Despine and Alexandre Bertrand, the Paris physician who memorably diagnosed Nanette as suffering from “hysteria complicated by ecstasy.” While hysteria would become a fashionable disease among urban women by the end of the nineteenth century, the case of Nanette Leroux differs sharply from this pattern in its early date and rural setting.

Filled with intimate details about Nanette’s behavior and extensive quotations of her utterances, the case is noteworthy for the sexual references that contemporaries did not recognize as such; for its focus on the difference between biological and social time; and for Nanette’s fascination with the commodities available in the region’s nascent marketplace. Goldstein’s introduction brilliantly situates the text in its multiple contexts, examines it from the standpoint of early nineteenth-century medicine, and uses the insights of Foucault and Freud to craft a twenty-first-century interpretation.

A compelling, multilayered account of one young woman’s mental afflictions, Hysteria Complicated by Ecstasy is an extraordinary addition to the cultural and social history of psychiatry and medicine.