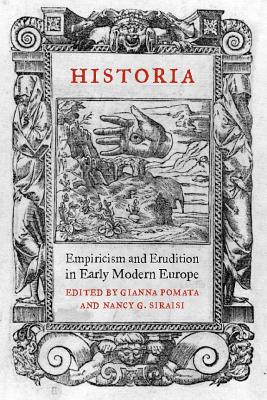 The early modern genre of historia connected the study of nature and the study of culture from the early Renaissance to the eighteenth century. The ubiquity of historia as a descriptive method across a variety of disciplines—including natural history, medicine, antiquarianism, and philology—indicates how closely intertwined these scholarly pursuits were in the early modern period. The essays collected in this volume demonstrate that historia can be considered a key epistemic tool of early modern intellectual practices.

Focusing on the actual use of historia across disciplines, the essays highlight a distinctive feature of early modern descriptive sciences: the coupling of observational skills with philological learning, empiricism with erudition. Thus the essays bring to light previously unexamined links between the culture of humanism and the scientific revolution.

The contributors, from a range of disciplines that echoes the broad scope of early modern historia, examine such topics as the development of a new interest in historical method from the Renaissance artes historicae to the eighteenth-century tension between "history" and "system"; shifts in Aristotelian thought paving the way for revaluation of historia as descriptive knowledge; the rise of the new discipline of natural history; the uses of historia in anatomical and medical investigation and the writing of history by physicians; parallels between the practices of collecting and presenting information in both natural history and antiquarianism; and significant examples of the ease with which early seventeenth-century antiquarian scholars moved from studies of nature to studies of culture.