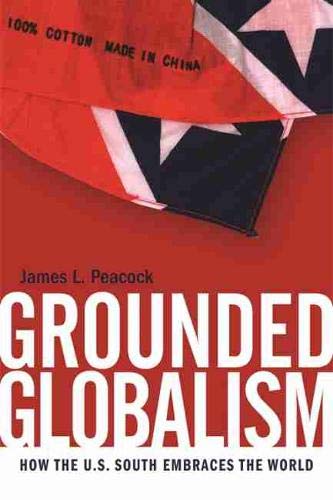 The world is flat? Maybe not, says this paradigm-shifting study of globalism's impact on a region legendarily resistant to change. The U.S. South, long defined in terms of its differences with the U.S. North, is moving out of this national and oppositional frame of reference into one that is more international and integrative. Likewise, as the South (home to UPS, CNN, KFC, and other international brands) goes global, people are emigrating there from countries like India, Mexico, and Vietnam-and becoming southerners. Much has been made of the demographic and economic aspects of this shift. Until now, though, no one has systematically shown what globalism means to the southern sense of self.

Anthropologist James L. Peacock looks at the South of both the present and the past to develop the idea of "grounded globalism," in which global forces and local cultures rooted in history, tradition, and place reverberate against each other in mutually sustaining and energizing ways. Peacock's focus is on a particular part of the world; however, his model is widely relevant: "Some kind of grounding in locale is necessary to human beings."

Grounded Globalism draws on perspectives from fields as diverse as ecology, anthropology, religion, and history to move us beyond the model, advanced by such scholars as C. Vann Woodward, that depicts the South as a region paralyzed by the burden of its past. Peacock notes that, while globalism may lift old burdens, it may at the same time impose new ones. He also maintains that earlier regional identities have not been replaced by the rootless cosmopolitanism of cyberspace or other abstracted systems. Attachments to place remain, even as worldwide markets erase boundaries and flatten out differences and distinctions among nations. Those attachments exert their own pressures back on globalism, says Peacock, with subtle strengths we should not discount.