By Hyperides
Edited and translated by Judson Herrman (NHC Fellow, 2006–07) 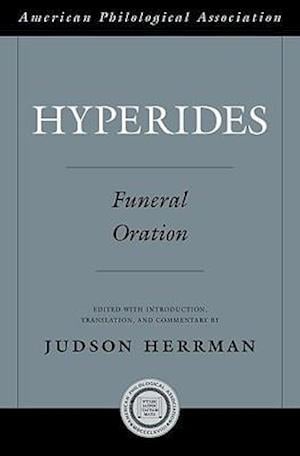 Hyperides' Funeral Oration is arguably the most important surviving example of the genre from classical Greece. The speech stands apart from other funeral orations (epitaphioi) in a few key respects. First, we have the actual text as it was delivered in Athens (the other speeches, with the possible expection of Demosthenes 60, are literary compositions). Next, in contrast to other orations that look to the past and make only the vaguest mention of recent events, Hyperides' speech is a valuable source for the military history of the Lamian War as it captures the optimistic mood in Athens after Alexander's death. Finally, the speech has been singled out since Longinus' time for its poetic effects.

This volume is a new critical edition and commentary of the speech, written for scholars and graduate students in classics and ancient history. Although Hyperides ranked nearly as high as Demosthenes in the canon of Attic orators and his funeral oration will make the speech much more accessible to a wide range of scholars. The text is based on a full examination of the papyrus and includes an apparatus criticus, with a complete listing of all conjectures in a separate appendix. The translation is clear and accurate and the commentary provides a mixture of historical, cultural, and literary material.