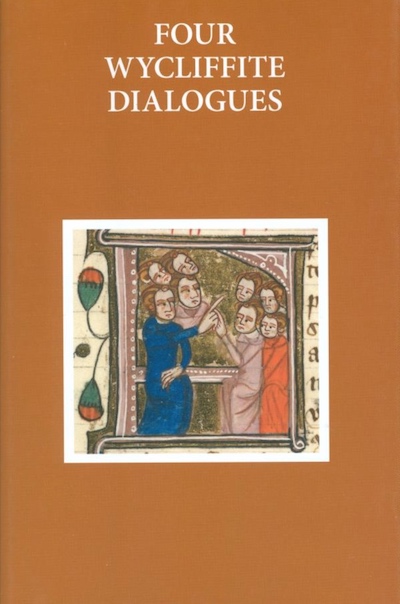 An edition of four previously unpublished heretical dialogues in Middle English, translated or adapted from Wycliffite sources composed circa 1380-1420. These previously unpublished prose treatises, cast as fictional dialogues, all survive in the form of single manuscripts, probably by different authors, but they cohere in their ideological outlook, subject matter, and debate form. The Dialogue between Jon and Richard concerns the four orders of friars; the Dialogue between a Friar and a Secular claims to be the written record of an oral debate that took place before a Lord Duke of Gloucester, and invites the lord to judge the two disputants: the friar offers a series of tendentious propositions on salvation, sin, and mendicancy, rebutted by the secular priest. The Dialogue between Reson and Gabbyng is a free translation and adaptation of the first twelve chapters of Wyclif's Dialogus (Speculum ecclesie militantis). The Dialogue between a Clerk and a Knight stages a conflict between papal and imperial, or regal, power, insisting on the rights of the king and his lords to remove the goods of corrupt clergy from England. These dialogues provide a comprehensive introduction to Wycliffite belief, and arguments on a range of controversial topics. The edition includes an introduction, detailed explanatory notes, and a glossary.