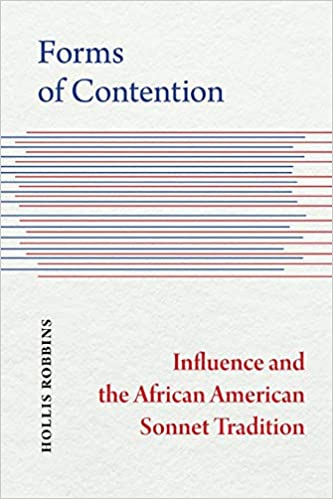 Forms of Contention argues for the centrality of sonnet writing to African American poetry, focusing on significant sonnets, key anthologies, and critical debates about poetic form to show that the influence of black sonnet writers on each other challenges long-standing claims that sonnet writing is primarily a matter of European influence. The banishment of much nineteenth- and twentieth-century formal poetry from the black poetry canon in the 1960s because it was too "traditional" long concealed the African American sonnet's legacy. In the twenty-first century, the sonnet has blossomed as a black poetic form, even while sonnet writers rarely acknowledge the rich history of black sonnets. With digital technology, a century of sonnets published in African American newspapers has reemerged to reveal surprising patterns of influence.

Historically, academic study of African American literature has focused on four concerns: the historical and economic conditions of production and publication of black literature; the political and cultural importance of black literature in America; genres of and trends in black literature; and the nature of African American literature as reflective of the black experience. Hollis Robbins engages with these concerns while opening up a fifth conversation: auxiliary genealogies of influence for black aesthetic production that foreground form and that promote new conversations about form generally-namely, how exactly form enables participation and protest and the overthrow and undermining of aesthetic expectation. Thus, Robbins uses the sonnet as a case study for exploring the broader literary history of African American literature, offering a thorough analysis of the contentious relationship of an old-world poetic form to new world poetry.