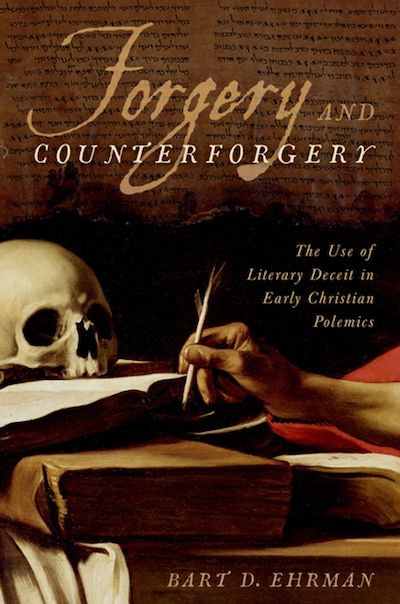 "Arguably the most distinctive feature of the early Christian literature," writes Bart Ehrman, "is the degree to which it was forged." The Homilies and Recognitions of Clement; Paul's letters to and from Seneca; Gospels by Peter, Thomas, and Philip; Jesus' correspondence with Abgar, letters by Peter and Paul in the New Testament--all forgeries. To cite just a few examples.

Forgery and Counterforgery is the first comprehensive study of early Christian pseudepigrapha ever produced in English. In it, Ehrman argues that ancient critics--pagan, Jewish, and Christian--understood false authorial claims to be a form of literary deceit, and thus forgeries. Ehrman considers the extent of the phenomenon, the "intention" and motivations of ancient Greek, Roman, and Jewish forgers, and reactions to their work once detected. He also assesses the criteria ancient critics applied to expose forgeries and the techniques forgers used to avoid detection. With the wider practices of the ancient world as backdrop, Ehrman then focuses on early Christian polemics, as various Christian authors forged documents in order to lend their ideas a veneer of authority in literary battles waged with pagans, Jews, and, most importantly, with one another in internecine disputes over doctrine and practice. In some instances a forger directed his work against views found in another forgery, creating thereby a "counter-forgery." Ehrman's evaluation of polemical forgeries starts with those of the New Testament (nearly half of whose books make a false authorial claim) up through the Pseudo-Ignatian epistles and the Apostolic Constitutions at the end of the fourth century.

Shining light on an important but overlooked feature of the early Christian world, Forgery and Counterforgery explores the possible motivations of the deceivers who produced these writings, situating their practice within ancient Christian discourses on lying and deceit.