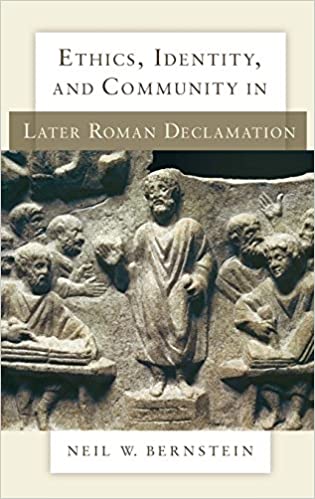 Rhetorical training was the central component of an elite Roman man's education, and declamations--imaginary courtroom speeches in the character of a fictional or historical individual--were the most advanced exercises in the standard rhetorical curriculum. The Major Declamations is a collection of nineteen full-length Latin speeches attributed in antiquity to Quintilian but most likely composed by a group of authors in the second and third centuries CE. Though there has been a recent revival of interest in Greco-Roman declamation, the Major Declamations has generally been neglected.

Ethics, Identity, and Community in Later Roman Declamation is the first book devoted exclusively to the Major Declamations and its reception in later European literature. It argues that the fictional scenarios of the Major Declamations enable the conceptual exploration of a variety of ethical and social issues. Chapters explore these cultural matters, covering, in turn, the construction of authority, the verification of claims, the conventions of reciprocity, and the ethics of spectatorship. The book closes with a study of the reception of the collection by the Renaissance humanist Juan Luis Vives and the eighteenth-century scholar Lorenzo Patarol, followed by a brief postscript that deftly surveys the use of declamatory exercises in the contemporary university. This much-needed and engaging study will rescue the Major Declamations from generations of neglect, while critically informing current work in rhetorical studies.