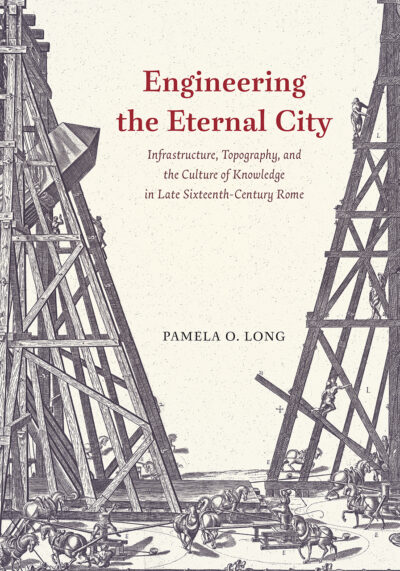 Chicago: The University of Chicago Press, 2018

Between the catastrophic flood of the Tiber River in 1557 and the death of the “engineering pope” Sixtus V in 1590, the city of Rome was transformed by intense activity involving building construction and engineering projects of all kinds. Using hundreds of archival documents and primary sources, Engineering the Eternal City explores the processes and people involved in these infrastructure projects—sewers, bridge repair, flood prevention, aqueduct construction, the building of new, straight streets, and even the relocation of immensely heavy ancient Egyptian obelisks that Roman emperors had carried to the city centuries before.

This portrait of an early modern Rome examines the many conflicts, failures, and successes that shaped the city, as decision-makers tried to control not only Rome’s structures and infrastructures but also the people who lived there. Taking up visual images of the city created during the same period—most importantly in maps and urban representations, this book shows how in a time before the development of modern professionalism and modern bureaucracies, there was far more wide-ranging conversation among people of various backgrounds on issues of engineering and infrastructure than there is in our own times. Physicians, civic leaders, jurists, cardinals, popes, and clerics engaged with painters, sculptors, architects, printers, and other practitioners as they discussed, argued, and completed the projects that remade Rome.