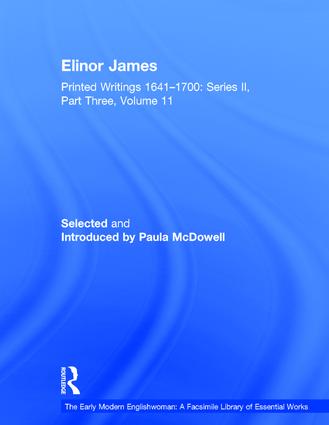 This volume makes available for the first time the complete surviving works of the London printer-author Elinor James (c.1645-1719). Uniquely in the history of early modern women, James wrote, printed and distributed more than ninety pamphlets and broadsides addressing political, religious and commercial concerns. Written over a period of 35 years, her works provide us with a running commentary on the major national events of a tumultuous period such as the Revolution of 1688, the Union of England and Scotland in 1707, and the Jacobite uprisings in 1715-16. During her lifetime, England saw the succession of six different monarchs. James petitioned all of them and claimed to have obtained audiences with three. In 1689 she was gaoled in Newgate prison, accused of disseminating seditious material condemning William III for accepting the English crown. James's texts address a staggeringly broad range of concerns. She petitioned Parliament concerning legislation affecting the printing trades and petitioned fellow printers concerning labour relations in London printing houses. She petitioned City authorities on issues such as the enforcement of bylaws or who to vote for in City and parliamentary elections. It is hoped that by making available all of James's known works, this volume will inspire the collective efforts of scholars from many different disciplines to decipher her references to contemporary events, issues and persons, as well as prompting further discoveries of as yet unidentified works.