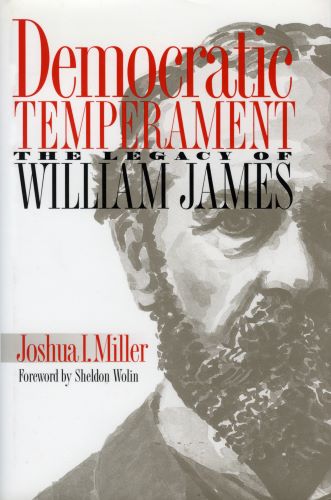 Nineteenth-century psychologist and pragmatist philosopher William James is rarely considered a political theorist. Renowned as the author of The Principles of Psychology and The Varieties of Religious Experience, James is often viewed as a radical individualist with no interest in politics; yet he was a critic of imperialism and absolutism and an advocate of tolerance, and his writing includes a penetrating analysis of political psychology.

This first book by a political theorist devoted exclusively to James's theory argues that political concerns were in fact central to his intellectual work. Joshua Miller links James to the contemporary public dialogue by treating him as a theorist of action and exploring the complexities of that theory. He also relates the philosopher's thought to his own political experiences and observations and-by explicating, criticizing, and meditating on James-develops provocative new ideas about issues facing democracy today.

At the heart of the book is James's description of the "democratic temperament," which comprises a willingness to act, the placing of public good ahead of private comfort, generosity toward one's opponents, and mutual respect among citizens of different viewpoints, races, genders, classes, and religions. Miller sees this temperament as a healthy corrective to the mean-spiritedness that characterizes so much current political discourse, which is precisely what makes James's insights so relevant to today's political environment. By revealing how James speaks to the paradoxical condition of modern political existence-withdrawal from public life combined with fanatical action-Miller shows how James's views apply to the possibility and problems of reviving participatory democracy in our era.

Scholars who have never considered the political aspects of James's work will find in this study a new way of approaching him and of reconsidering radical democracy, while readers unfamiliar with James will find it a highly accessible introduction to a significant aspect of his thought. Democratic Temperament clearly shows that James deserves to be read not only for his recognized genius but also for his fresh and unexpected insights into the possibilities and paradoxes of American democratic political consciousness.